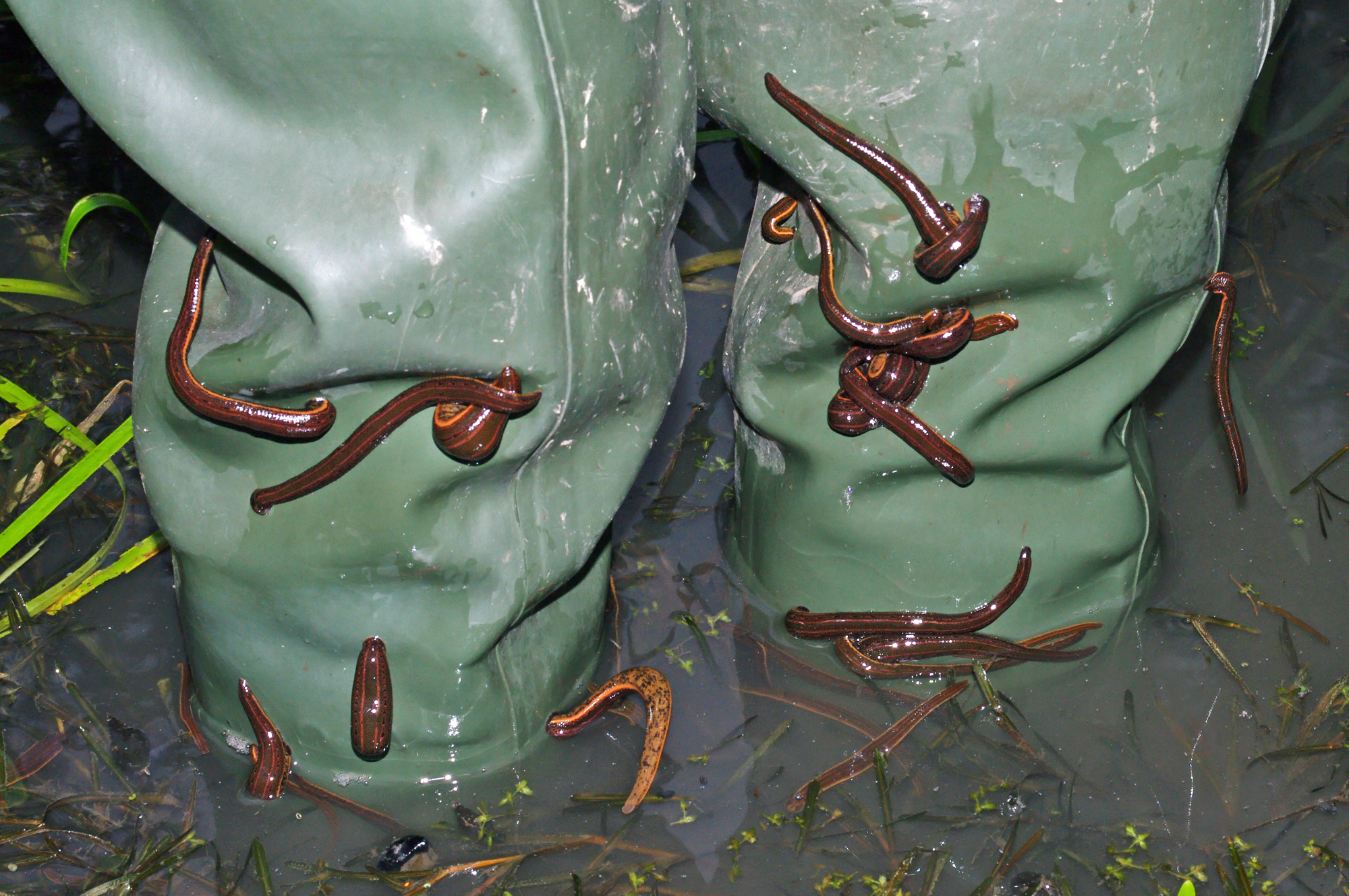 Medicinal Leeches, Hirudo medicinalis grab onto waders while crossing a small weedy pond. Such a dense population of leeches is unusual – medical leeches have become a rare species in the wild. Credit: Christian Fischer CC BY-SA 3.0 via Wikimedia Commons.

Tales of undead beings subsisting on the blood of the living have a long history and the modern vampire spawned from 19th century novels remains an enduring character and Halloween staple. However, blood-feeding - hematophagy to give its technical name, is no fiction. Although only three species of mammals live solely on blood – the famous the vampire bats - there are about 14,000 species of insects that do, many of which are flies – including the familiar mosquitoes, gnats and horseflies. Annelids - the group that earthworms belong too - also have their ‘vampires’ – leeches!

Leeches are closely related to earthworms and possess the same segmented body structure; but unlike earthworms they do not have bristles (setae) and have two suckers – one on each end. There are around 700 species of leeches worldwide although most of these do not feed on blood but are instead predatory on invertebrates – including earthworms – as this dramatic footage from the BBC’s Wonders of the Monsoon demonstrates.

Some leeches are generalists and will feed on whatever passes by – as many a jungle explorer has found out! Others have more particular requirements with the award for most specific feeder going to the Hippopotamus Leech (Placobdelloides jaegerskioeldi) which feeds only up the bottom of the African Hippopotamus. The most famous leech is probably the Medicinal Leech (Hirudo medicinalis) which has been used in medicine for at least 2,500 years. The human body was thought to consist of four "humors" (blood, phlegm, black bile and yellow bile) with illnesses being caused by an imbalance of these. Bleeding using leeches or other methods was thought to rebalance the humors and improve health. Except in a very few illnesses this bleeding was unlikely to help but leeches still have a use in medicine today in microsurgery.

Wounds from operations such as plastic and reconstructive surgeries often do not have enough veins to carry blood away, causing it to build up, clog and damage the tissue. Placing a leech on the area removes excess blood and promotes healing by allowing fresh blood to reach the wound. Leeches produce an anticoagulant called hirudin which prevents blood clotting while they are feeding. Synthetic variants of this are sometimes used to treat patients with disorders that cause blood clots. Over-collecting of the Medicinal Leech in the 19th Century, coupled with drainage and pollution of the freshwater pools and ditches in which they live has reduced their population substantially. They are considered near-threatened by the International Union for Conservation of Nature (IUCN) and are protected in many countries, including the UK.

Earthworms may not be as scary as leeches but they are important for healthy soils and we need your help to find out more about many and what types of earthworms there are in UK soils. Autumn is an excellent time to find earthworms in your gardens, allotments and green spaces so if you haven’t had a chance to take part in Earthworm Watch please sign up, if you have completed the survey but have not sent in your results, please submit here. Earthworm Watch has been developed by Earthwatch (Europe), and the Natural History Museum, London, in association with the Earthworm Society of Britain.

1Spring is the perfect time to explore your garden...