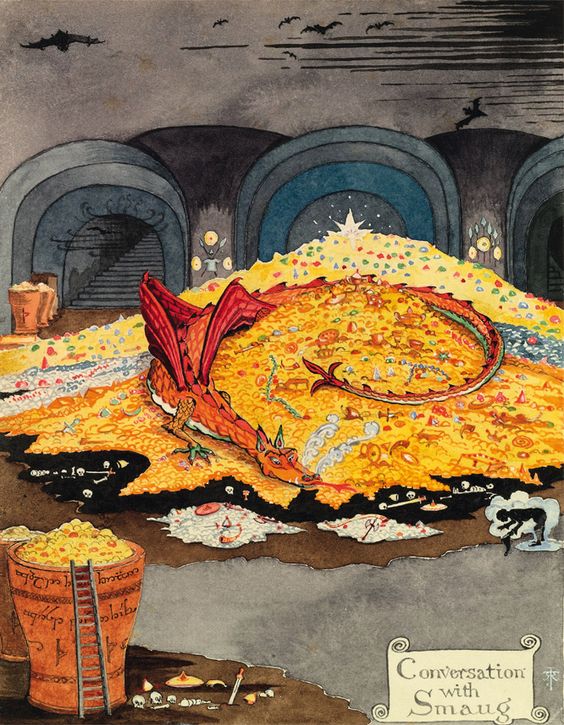 Conversation with Smaug by J.R.R. Tolkien in The Hobbit.

Whilst Earthworm Watch is keen to promote the value that earthworms have through their activities in the soil and how our scientific data (that you are actively helping us to gather) can improve their populations by better understanding their habitats, references to worms in literature, folklore and mythology is a fascinating one.

Through the work of passionate scientists like Victoria Burton and the Earthworm Society of Britain we know there are 31 species in the UK and Ireland, but few earthworms have been given regional names (unlike those of the equally ubiquitous woodlouse which has very many). The meaning of worm also does not just refer to the humble earthworm. Its other meaning actually comes from the Old English ‘wyrm’ which historically was a poetic term for a legless serpent or dragon.

Serpents and dragons feature in both Viking and Anglo-Saxon myths and stories. The dragon Nidhogg (also known as the 'Dread Biter') and serpent Midgard's Worm are the most celebrated in Viking stories. In Viking mythology, Jörmungandr or the Midgard Serpent grew so big that as it grew, it encircled the world and had to grasp its tail in its mouth. If it ever removed its tail from its mouth disaster would befall the earth. In the legend, Midgard's Worm dies fighting and killing the thunder god Thor at Ragnarok (Thor: Ragnarok is also the newest of Marvel’s Thor franchise).

With the ‘wyrm’ featuring in Viking mythology, legends in the North East of England tell of stories of gigantic 'worms' which terrorised the local area before being slain by a hero. The Lambton Worm is one of the best known of these (and partially inspired Lewis Carroll’s Jabberwocky of the Alice in Wonderland sequel ‘Through the Looking Glass…’). The story revolves around John Lambton, an heir of the Lambton Estate, County Durham, and his battle with a giant worm (dragon) that had attacked local villages. The Lambton worm, like others has been argued to have derived from the real Viking raids and invasions that took place during The Dark Ages.

'Wyrms' of course also feature in the writing of J.R.R. Tolkien such as The Hobbit with the beloved Bilbo Baggins, as ‘thief’ and ‘burglar’ attempting to outwit Smaug (regarded then as one of the most terrifying of all dragons of Middle-earth) on his quest with Thorin and the other Dwarves to re-take the Lonely Mountain, their homeland of Erebor (with The Hobbit Trilogy of the book adapted for screen by Sir Peter Jackson). Bilbo even says to the Dwarves at Erebor:

“Now I will make you an offer. I have got my ring and will creep down this very noon – then if ever Smaug ought to be napping – and see what he is up to. Perhaps something will turn up. ‘Every worm has his weak spot,’ as my father used to say, though I am sure it was not from personal experience.”

Despite Bilbo thinking he had gotten the better of Smaug, he sadly discovers that he was only pretending to sleep. So begins their conversation:

“Well thief! I smell you and I feel your air. I hear your breath. Come along! Help yourself again, there is plenty and to spare!”

But Bilbo was not quite so unlearned in dragon-lore as all that, and if Smaug hoped to get him to come nearer so easily he was disappointed.

“No thank you, O Smaug the Tremendous!” he replied. “I did not come for presents. I only wished to have a look at you and see if you were truly as great as tales say. I do not believe them.”

“Do you now?” said the dragon somewhat flattered, even though he did not believe a word of it.

“Truly songs and tales fall utterly short of the reality, O Smaug the Chiefest and Greatest of Calamities,” replied Bilbo.

If you thought ‘Smaug the Chiefest and Greatest of Calamities’ was terrifying than his ancestor Glaurung, also known as The Great Worm was even more ruthless, being allowed to command his own host of Orcs during the Battle of Tumhalad against the Noldor of Nargothrond led by Túrin Turambar, a story which unfolds in Tolkien’s Silmarillion and in greater detail in The Children of Hurin.

Worms are also featured in poetry with the most famous being "The Conqueror Worm" by Edgar Allan Poe about human mortality and the inevitability of death. Poet Anne Sexton finally brilliantly summarises our curiosity, fascination and the activities of earthworms in her poem Earthworm.

you are reworking their soil, you have

a grocery store there down under the earth

and it is well stocked with broken wine bottles,

that great brown flour that you kiss each day.

There are dark stars in the cool evening and

But what I want to know is why when small boys

dig you up for curiosity and cut you in half

why each half lives and crawls away as if whole.

Have you no beginning and end? Which heart is

the real one? Which eye the seer? Why

is it in the infinite plan that you would

be severed and rise from the dead like a gargoyle

As you can see, the earthworm has a fascinating literary past full of rich stories and I hope that when you encounter an earthworm (perhaps during your Earthworm Watch survey), it’ll inspire you to tell your own ‘wyrm’ story.

Earthworm Watch has been developed by Earthwatch (Europe), The Natural History Museum and the Earthworm Society of Britain to better understand the ecosystem benefits of earthworms. Earthworm Watch allows the public to help scientists map their abundance, better understand the human impact on their populations and with further research measure the services these ‘ecosystem engineers’ provide.  If you want to get involved, then sign up here, or if you have received a pack, but yet to do it, please complete your survey as soon as possible as earthworms will begin to retreat underground during the hot and dry summer months. If you haven’t submitted your data, then please submit data here. 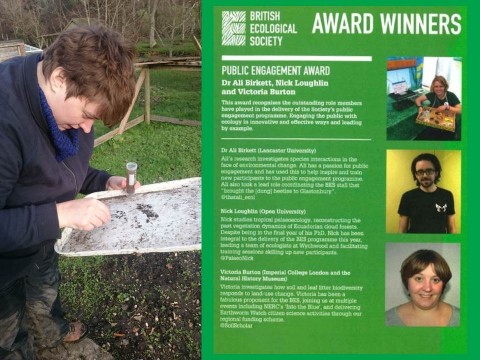 Victoria pictured (left) looking at a sample for earthworms and the BES award highlighted (right) (along with Dr. Ali Birkett and Nick Loughlin).