The temperature may have dropped recently, with frosts appearing overnight, but earthworms are very active at this time of year. Under the soil surface it is a few degrees warmer and earthworms continue to feed on dead and decaying leaves and organic material, mixing the soil horizons through their burrowing, aerating the soil and storing carbon in tiny fragments. Now is a really good time to get out into your gardens, allotments and green spaces to do Earthworm Watch (although if you are surveying we urge you to wear appropriate clothing, avoid surveying in bad weather and follow the health and safety information in the Earthworm Watch instruction booklet).

Members of the Earthworm Watch team and our supporters have been busy over the half term with a variety of events to inspire everyone to appreciate the value that earthworms, as well as compost creatures have in creating soil and improving soil health. If you want an idea of the scale of their impact on leaf litter, check out this short video about the process called bioturbation, which is the mixing of plant residues into soils and sediments by the activity of wildlife living within the soil. Our partners at the Natural History Museum have been on their home turf promoting Earthworm Watch, among their suite of citizen science projects such as Big Seaweed Search. Victoria Burton, lead scientist for the project was on hand to explain the survey and explore some of the earthworms that visitors might find when digging in their gardens or local green spaces.

Anthony Roach, Community Engagement Coordinator and Dr. Alan Jones, Science Research Manager from Earthwatch travelled north to Yorkshire as they were kindly supported by the Royal Horticultural Society garden at RHS Harlow Carr as part of their half-term creepy creatures activities. Alan led demonstrations of Earthworm Watch and explored the variety of earthworms that can be found within our soils to some busy crowds at the magnificent RHS garden site in Harrogate. Anthony meanwhile delighted visitors by revealing the weird and wonderful creatures that live within compost from woodlice to pseudo-scorpions, earthworms to centipedes. The response from families was brilliant and has led to new data points in the region.

Thanks to the Oxford University Botanic Gardens which allowed Earthworm Watch to get crafty with origami earthworms as part of their ‘Art in the Autumn’ event to inspire visitors to get creative whilst also spotting Autumn wildlife. A big thank you also to our friends at the Wildfowl & Wetland Trust’s London Wetland Centre - who hosted us a year ago for a large scale Earthworm event and who during this half term ran Earthworm Watch surveys at the centre. With the Earthworm Watch team travelling around the UK, such as our event in June at Amgueddfa Genedlaethol Caerdydd - National Museum Cardiff, we have been able to cover new areas of the country that so far have received fewer earthworm data points.

To better understand the abundance of earthworms in different soils across the UK, we are asking everyone to monitor earthworm numbers found in soil samples across a range of environmental conditions. To meet this challenge, we therefore ask you to survey far and wide across as broad a geographical area as you can. Currently the south east of England is winning hands down, but can you represent your region and do better? We have fewer data points for instance in the west, north and north-east of England. The more data points we have, and more importantly the more varied the environmental conditions that the earthworms are recorded within, the greater their value to science in producing a more reliable and comprehensive data set, that could improve our understanding of these amazing creatures.

Earthworm Watch has been developed by Earthwatch (Europe), and the Natural History Museum, London, in association with the Earthworm Society of Britain. If you haven’t had a chance to take part in Earthworm Watch please sign up, if you have completed the survey but have not sent in your results, please submit here.

1Spring is the perfect time to explore your garden... 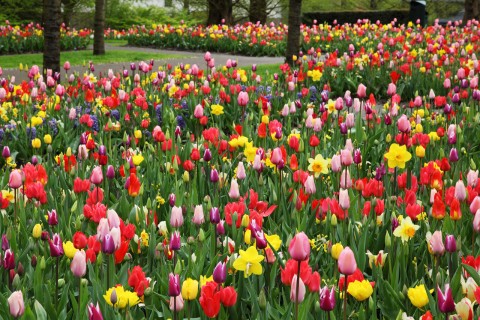