Earthworm stone used by Darwin to measure how much soil earthworms move. This stone was reconstructed by his son's company Cambridge Instrument Company, photographed in 1932.

Charles Darwin is best known for his contribution to the theory of evolution and his book On the Origin of Species but he was also fascinated by earthworms whose behaviour he observed and experimented on in his garden at Down House, Downe, Kent. Darwin’s book The Formation of Vegetable Mould through the Action of Worms, with Observations on their Habits is the result of his 40 year study on earthworms, including a 29 year experiment measuring the rate that a stone is buried by the burrowing activities of earthworms. ‘Worms’ as it is affectionately known was very popular, initially outselling On the Origin of Species with 6,000 copies in the first year, and was to be Darwin’s last scientific book, published in October 1881 just six months before he died.

Darwin found that earthworms have no sense of hearing – being indifferent to being shouted at and various musical instruments including a piano, a bassoon and a tin whistle. However, earthworms in pots placed upon a piano retreated into their burrows when notes were played indicating they are sensitive to vibrations transmitted through the soil. Darwin also investigated earthworm’s sense of smell by blowing tobacco smoke and perfume to which they did not react. They did however respond to the smell of their favourite foods. Darwin experimented with giving captive earthworms many different foods and noted which they preferred. He found wild cherry leaves were preferred over lime and hazel leaves. Cabbages, horseradish, carrot and celery were also liked but herbs such as sage, thyme and mint were barely touched.

Much of Darwin’s book covers his work measuring the amount of earth brought to the surface by earthworms, both by measuring the quantity of casts (soil passed out of earthworms) produced and the rate that objects sink into the ground. Darwin’s initial observations included how cinders, lime and stones tended to be buried below the surface of fields over time. He also observed how great stones and ancient buildings are slowly buried - one of these stones can still be seen at Leith Hill and Darwin also made a trip to Stonehenge to observe buried stones there. Darwin and his son Horace measured the rate of burial of a stone placed on the ground in his garden - the ‘worm stone’ still present at Down House was reconstructed by Horace’s Cambridge Instrument Company. Darwin estimated that earthworms move 15 tons of soil per acre to the surface each year - a process we now call bioturbation which is well demonstrated in this video.

Deep-living (or anecic) earthworms create a deep vertical burrow which often has a midden consisting of stones, leaves, twigs and other items pulled into the entrance - perhaps as protection against predators, rain, cold or drought. Darwin found that earthworms do not select items randomly - he provided them with different types of leaves and observed how they were pulled down, finding that 80% of the leaves had been drawn in by the tip. Darwin then experimented further by providing the earthworms with triangles of paper - some broad and others narrow - and as with leaves the narrower end was dragged down first.

Darwin concludes that "there are few animals which have played so important a part in the history of the world than the earthworm" but 136 years later we still don’t know how many and what types of earthworms there are in gardens and other green spaces such as allotments, school grounds and parks. By taking part in Earthworm Watch you can follow in Darwin’s footsteps and contribute to earthworm science.

The Formation of Vegetable Mould through the Action of Worms, with Observations on their Habits by Charles Darwin (1881) is available online at http://darwin-online.org.uk. Earthworm Watch has been developed by Earthwatch (Europe), and the Natural History Museum, London, in association with the Earthworm Society of Britain. If you haven’t had a chance to take part in Earthworm Watch please sign up, if you have completed the survey but have not sent in your results, please submit here. 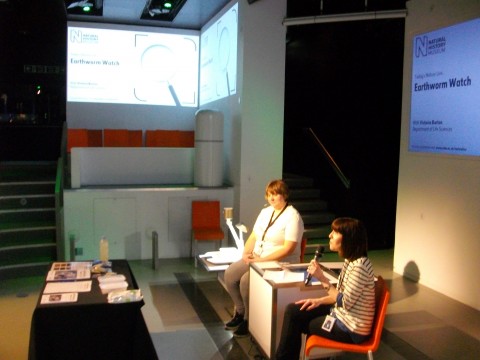